The next day I woke early, showered & put on my chefs whites ready to prepare the food for the christening after party. I picked beans, peppers & herbs from the garden for the salads.

Pavel & Son were busy getting the pig ready for the spit roast .

First the spike goes in the head, under the skin & out through the back!

Then the small spike are placed in the pig to hold it securely in place!

So it was like old times, a mobile kitchen set up in the garage, a bench & a radio! 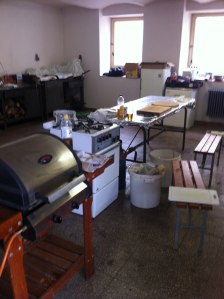 Myself, Tim & Stu prepared the food all morning & drank beer from the keg!

The coffee machine was set up too!!

Wee finished around 12.30, just enough time for a quick shower, & then it was off to the church for Lilian’s christening!

The ceremony was all in Czech, so I didn’t understand a word, but it was nice! the priest was warm & kind.

Having missed the wedding two years ago due to prepping for the wedding breakfast, it was nice to make the christening this year!

Afterwards we made our way back to the house for hog roast, salads & beer!

It was a much quieter affair than the wedding, the food went down well, the boar & beer even better!

Get ’em riding early! Young Danny on the bike!!

We spent the afternoon & evening drinking, walking around the lake & talking with one another.

The local band turned up & played blue grass late into the evening!

I tried to play along with the band again this time, but really shouldn’t have!! I need to practice more! Eventually people started to leave & the party whittled down to the remaining few who were staying or local. I turned in around 11pm to my tent & slept like a baby!