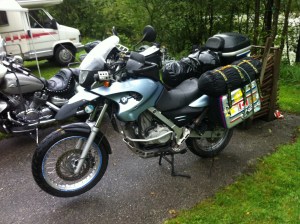 I woke up to……..yep you guessed it…rain! If you have never ridden a bike across Europe & taken down a tent in the rain then you really are missing something!

I put on my bike gear in the tent & loaded the bike with the panniers, then pulled down the tent. I squished & squashed it to the roll bags & rode on out of there in to the valleys heading for the Road to Salzburg. 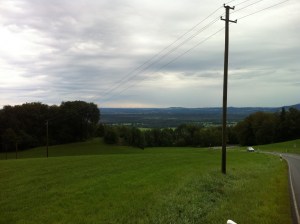 I managed to find a solution to the sat nav problem. If I rode with my laptop in my jacket I could power the sat nav via the computers battery which worked a treat, it made it a bit uncomfortable to ride, but better to know where your going & be uncomfortable than be lost and comfy!

The weather was not good. It rained solid for two hours, which made the ride very painful, trying to see out of a mist filled rain sodden visor isn’t an ideal way to ride & if you wait to ride out the storm you don’t make any progress. When it eventually stopped I went off the motorway & headed in to the hills for a bit. It was nice to go a slower pace & enjoy the countryside for a while. I passed a few peaceful quaint villages all in typical Austrian style!

I was soon back on the motorway & heading back into Germany enroute to Munich, the rain came down again, the spray on the road bad the visibility almost down to zero at points, riding behind trucks was not an option so I had to pass them all, with the wind, rain & spray it made dangerous riding conditions, but I trundled through all the same. Eventually a break came in the weather. I pulled over & called my brother in Regensburg & asked him to hook me up with a hotel near Luxembourg, as I couldn’t camp out again in the wet.

Good to his word he sent me an sms with the postcode & I punched it in to the sat nav. It was only 300kms or so from where I was. I pushed on through the rain/sun/rain/rain combination, stopping for fuel & a chance to dry off;

I met Eric from Eindhoven at a service stop.

He had been riding for two weeks around Europe, from The Ukraine to Romania & many more countries. He was riding a 1980 Honda CX500…..!

We rode together for about 100kms, until we went our separate ways. I hope he made it home safe.

I eventually made it to the hotel at 8:12pm a happier person than the previous night! The hotel was in Merzig-Weiler, West Germany.

I unpacked the bike, had some food & two Weisse beers, Showered & slept like a baby in a comfortable, warm dry bed. Small luxuries on the road go a long way.

2 thoughts on “Rain rain go away, come again another day.”