I wasn’t too sure where I was headed today when I left Saskatoon. I headed out west and eventually found myself on the road to Drumheller. 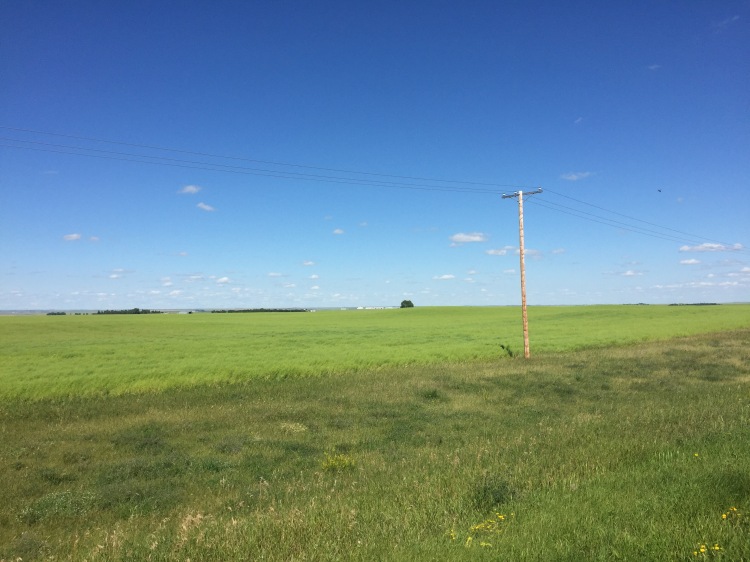 I left Saskatoon around 2pm, said goodbye to my friends I’d been staying with, and soon found myself out in the prairies again. They go on for ever! It’s an amazing landscape to ride through.
Fields of wheat for as far as the eye can see. I’ve got wheat for days! I stopped to fill up with motion potion at the first place I saw as I was running on empty and had my first chocolate bar in weeks!

It was a lovely day for a ride. Blue skies and a few clouds and no sign of rain!

I stopped to watch a train go past! Sounds sad, but out here they are something to behold.

When the train passed it felt like an earthquake under my feet. The ground literally shook continuously as the train rumbled past me sounding its horn! I couldn’t believe the feeing and was surprised the road did not brake up beneath me! I gave up counting the wagons after 26! Worth the time to see it!

I have a great video of it too! 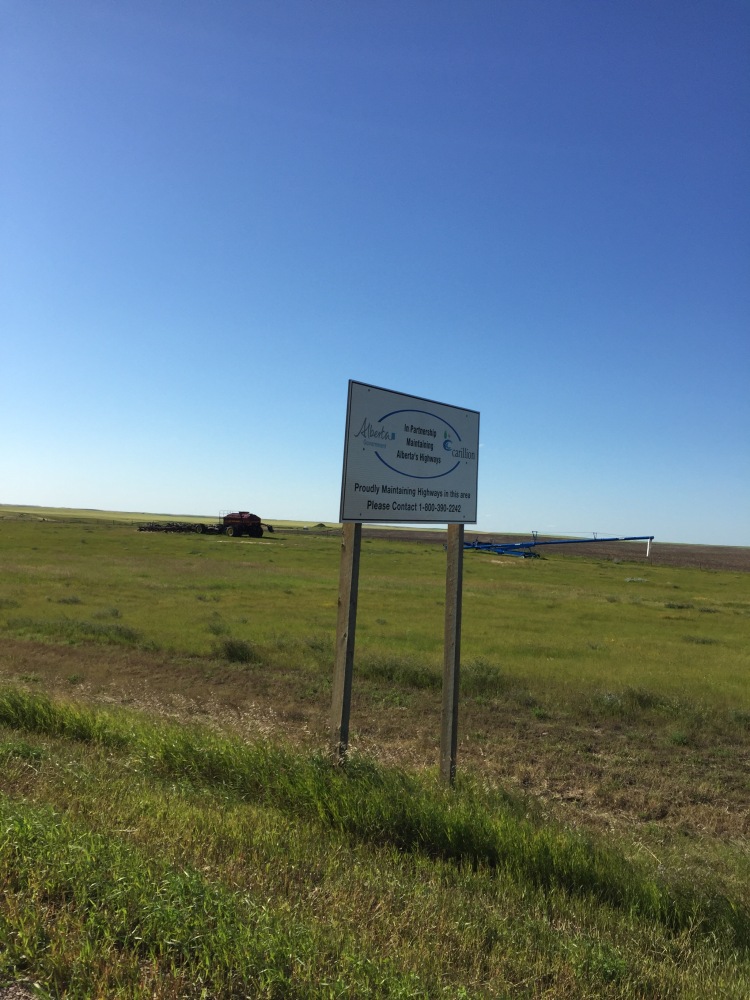 I crossed the provincial border out of Saskatchewan and into Alberta!

I kept my speed to a steady 100kmph all day long and it paid dividends as a few miles into Alberta the car that had overtaken me a while back had been pulled over by the police (with his “radar gun, radar gun, I’m making money and I’m having fun with my radar gun, radar gun”) and was feeling the long arm of the law and no doubt being given a speeding ticket and a jolly good talking too!

I passed by quietly without concern and carried in west. 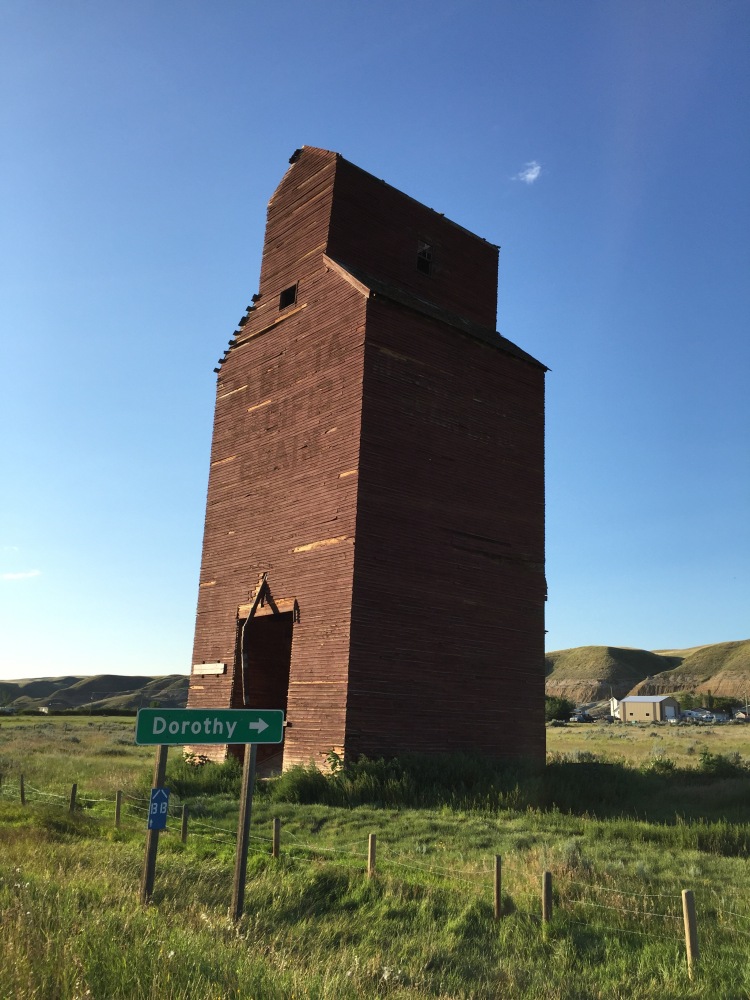 Eventually the landscape changed from fields of wheat to the badlands.

The badlands are as they sound, baron, desolate lands of green and brown, small bumpy hills of exposed strata of rock formed over millions of years. All there to see as you ride past.

As the sun went down I pulled into a rest area just off the road near the Hoodoos. Sadly the light was too poor to take a good picture and I had planned on sleeping there the night and taking some good ones in the morning, but we’ll get to that! For now you’ll have to look at the ones I took from the Internet!

The Drumheller hoodoos are internationally recognized icons of the Alberta badlands. Composed of sand and clay from the Horseshoe Canyon Formation, the solid, strong capstones protect the softer, underlying base creating their unique mushroom like shape. They have been formed over thousands of years by erosion caused by water, wind, and freeze/thaw cycles.

I had planned on sleeping at the rest stop in the brick picnic hut you can see In the top photo of the Hoodoos!

However, just as all the cars had driven off and I thought about setting up camp another three cars came along all at once and used the hut for an impromptu birthday party celebration whilst on the road! They were from Calgary and had family over from Pakistan and were showing them the badlands and set up the most amazing road kitchen I’ve ever seen. Gas stoves and pots and pans, you name it they had it! 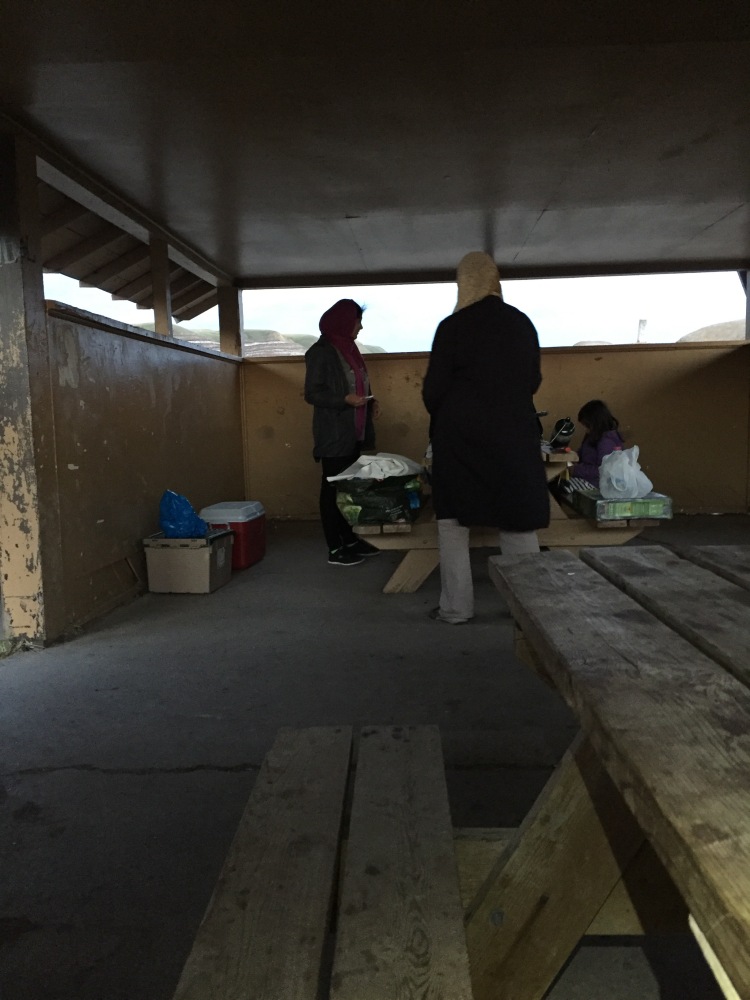 They very kindly invited me to join them so I gladly accepted and ate the best lamb biryani I’ve ever had in my life by the road side in Canada! 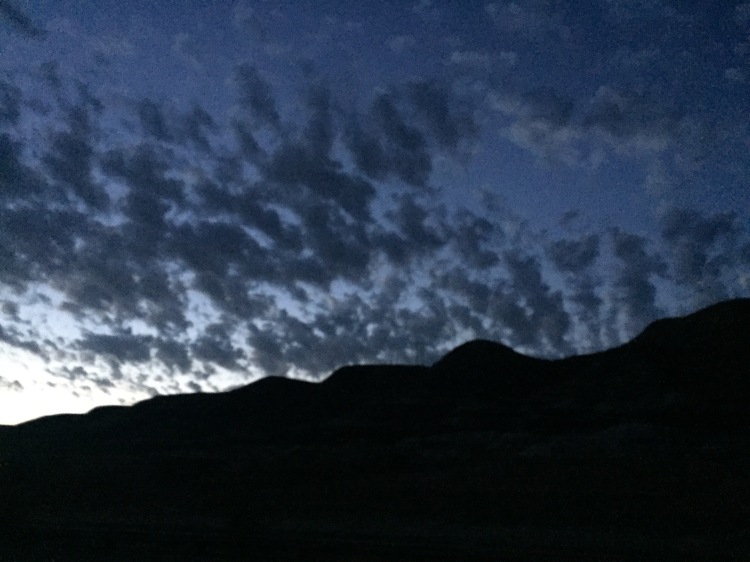 After a few house they packed up the kitchen and drive off to Calgary leaving me all alone in the brick picnic hut. I set up the hammock and settled down inside. But after about 15 minutes I heard noises and scraping around and my nerves got the better of me! I clapped my hands and made noise, got out the hammock and packed up camp!!! What a pussy! But hey, better that than get eaten whilst sleeping! I rode on westbound for a few more miles and came across the perfect sleeping arrangements. To see that though, you’ll have to wait for day 13’s post!