I woke up from the knock at the door. It was the security guard giving me my 7am alarm call as arranged the previous the evening!

And what a sight I woke up to! Having ridden late into the night and the last 30 miles in the pitch black I looked around at where I was! Mountains beyond mountains!

I washed up, got dressed rolled up my sleeping bag and walkded over to the restaurant for some breakfast! Cheese and mushroom omelette please, and lots of coffee! The weather was in between sun and rain with mountain misty clouds lurking in the sky not sure what they were doing!
I ate my breakfast whcih was pretty tasty, packed the bike and pushed on north towards Jasper! The roads were wide, the mountains tall along each side of the valley road, it reminded me of Glen Coe somewhat. 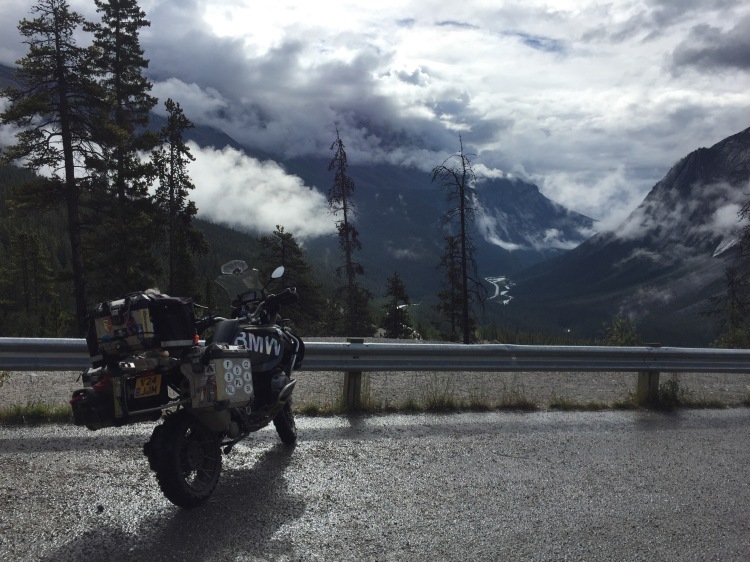 there was a steady climb around the mountains and beautiful scenery, big skies ! I kept riding through the lefts and rights and then came around the bend to see the Athabasca Glacier!

Above is Kevin, one half of the 2up duo! Beth, Kevin’s wife and riding partner travel all around the north American continent on their GSA, usually riding together off road in Utah and around the 4 corners! They were a really nice couple to meet! I had heard about them and seen pictures of their travels on facebook in the past so it was really nice to meet them in person! We talked for a while and then rode out together, Kevin and Beth going south, me going north!

Within a few minutes of being on the road again I saw in the distance cars all over the road and people walking about in the road. my first thought was that there was an accident ahead, so I slowed right down and pulled up cautiously, only to find that there was no accident and that everyone was getting out of their cars to see and take photographs of the Black Bear eating from berry bushes by the side of the road! Sadly I was no different!

I pulled the bike up straight in front of the bear about 6 feet away and made sure the go pro was rolling!

It was such a treat to see a bear! At last! WOW!! what an amazing sight to see! What amazed me more was that people were getting out of their cars and standing no more than 8 feet away from a big old bear! I couldn’t believe I was doing the same, but the bear seemed oblivious to the people there and just got on with eating berries from the branches!

I rolled on out and on the road towards Jasper!

I then parked up next to a BMW GS12oo from San Francisco and met John who had ridden up to Canada to visit his sister in Edmonton!

We sat down and talked bikes for a while, had a smoke, talked about our travels and where we were going. It was nice to meet him! The sun was out in full force now and it was getting hot!

We said our goodbyes, hooked up on facebook and I rode on out of Jasper and down the road into British Columbia! The best Place on Earth! Or so the sign says! 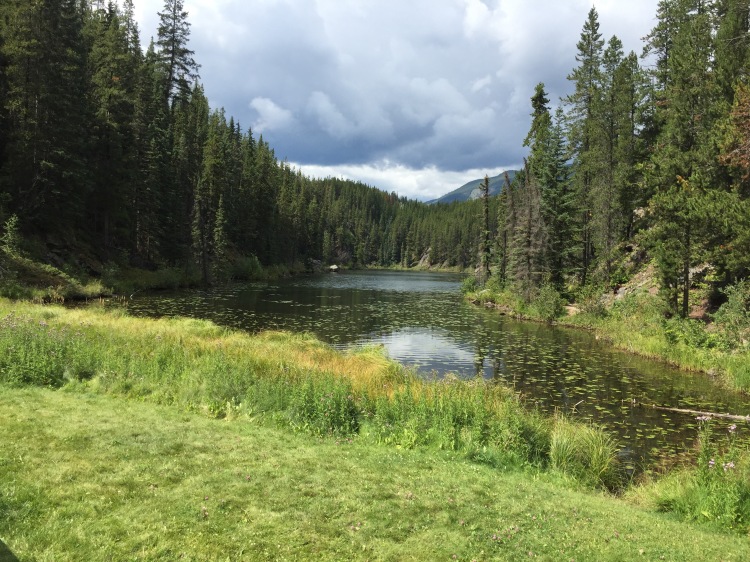 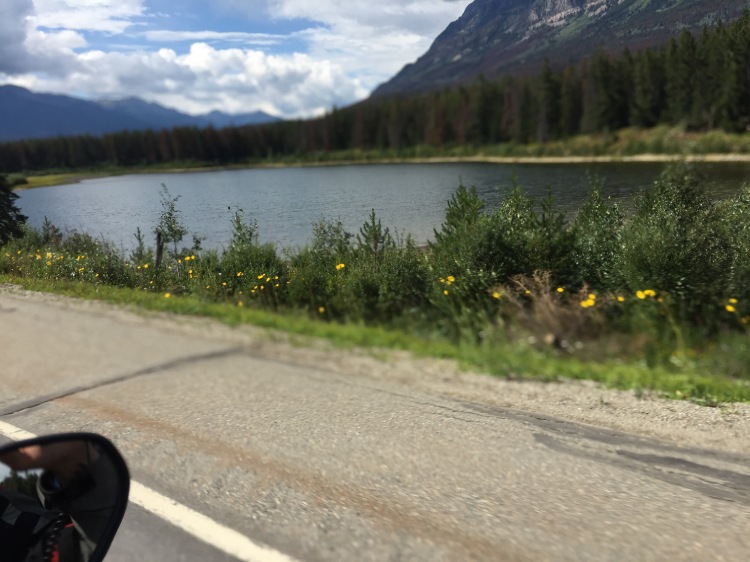 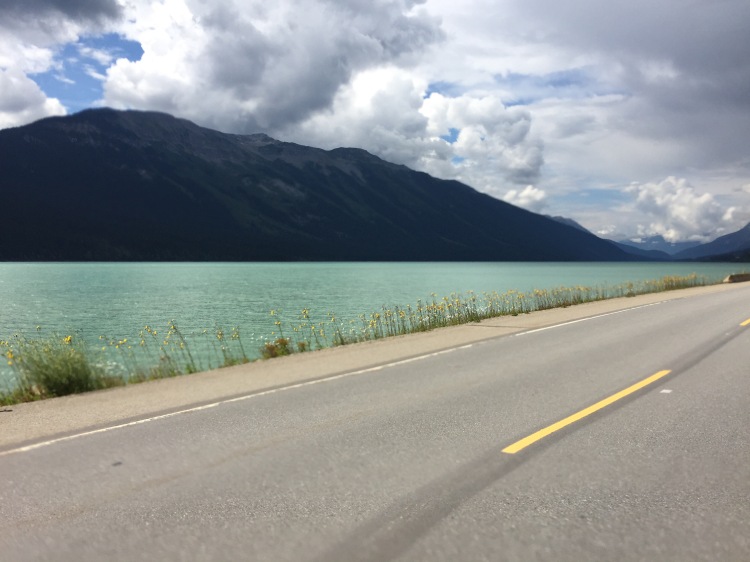 British Columbia was living up to it’s name and was looking pretty good!

I met Brian from Montana in the USA who was riding up to Alaska to see some grizzly bears! Rather him than me! 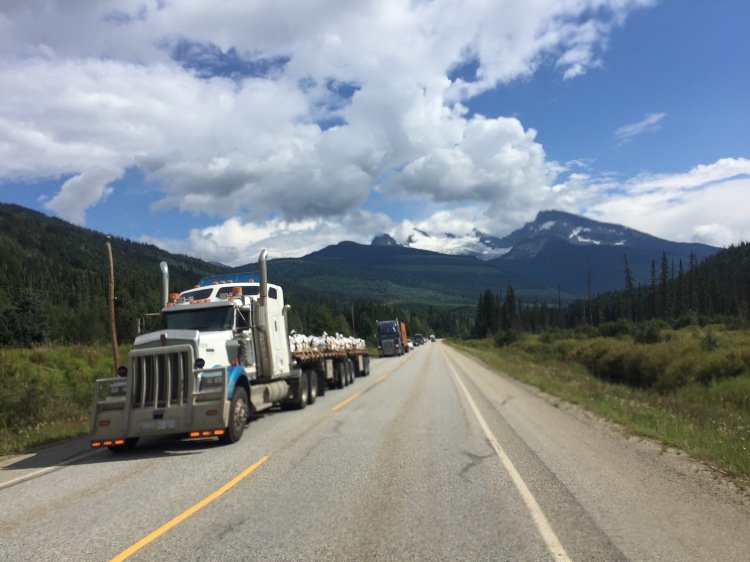 I chugged on through the valleys and stopped for petrol!

After the petrol station the heavens opened up, but I saw it coming and had already out my waterproof clothing on so wasn’t that fussed about it. 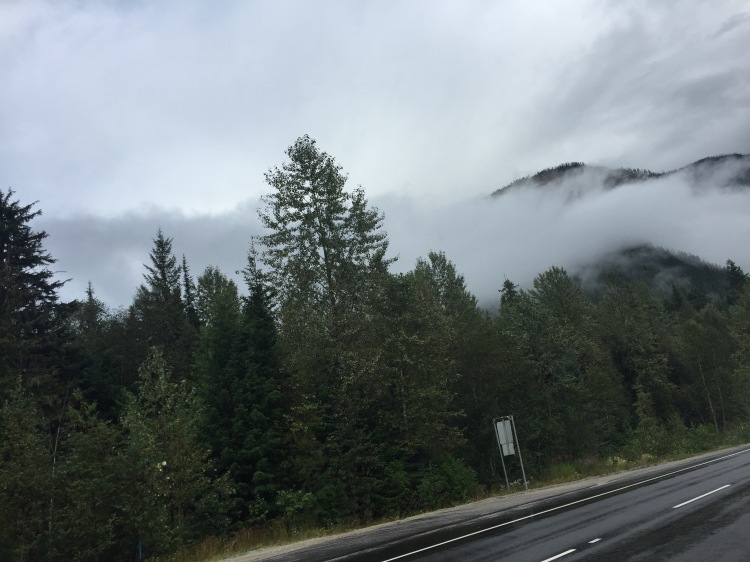 I saw this signpost for the Webber Family and had to take a photo of it! It was kind of unwelcoming….I would have loved to ridden in to the estate to see what they were like!

As I was passing by I saw this rainbow on my left and stopped to take one of the best photographs I’ve captured so far!

The rain came and went most of the early evening, and before too long I found myself in Kamloops. It’s a pretty little city, the downtown area is well serviced with all the mod cons you’d expect and I found a cheap motel to hide away from the evening rain and rest up for the night

Tomorrow I’ll be hanging In Kamloops and waiting for Tim Possible from Switzerland to arrive in town!