Today was my last full day of riding in Canada. When I woke up the sun was shining, blue skies with a few clouds, it was like Canada was saying ‘here’s some good weather for your last days ride enjoy the roads and thanks for coming!’ 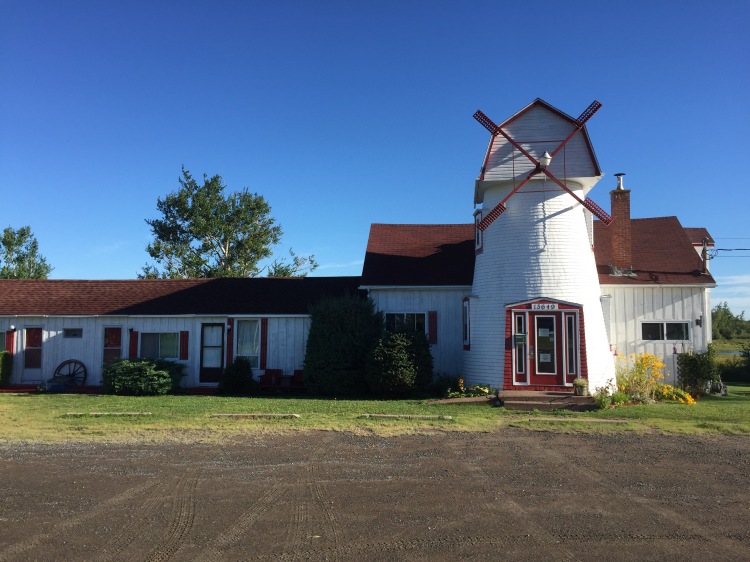 I washed up, packed my bags and hit the road to Cape Breton. 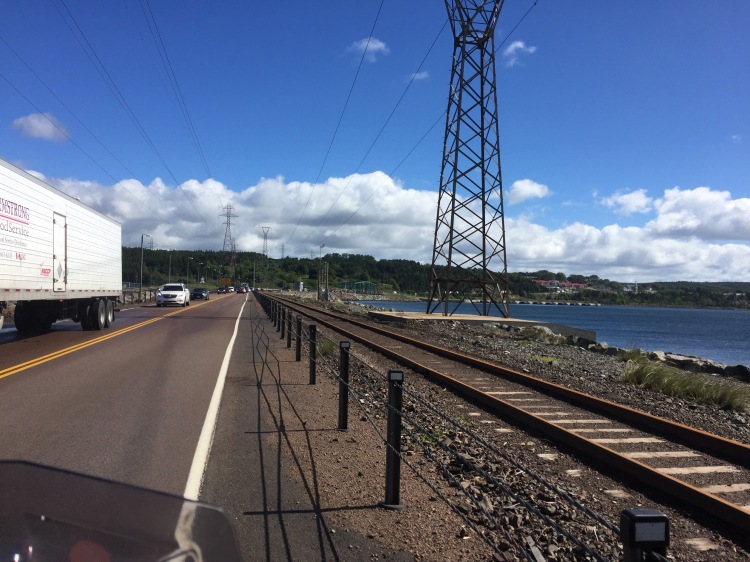 I had around 126 miles to ride to reach Cape Breton Island and put a shift on as I had a lot of miles to ride today. I wasn’t sure exactly where I was going to end up, but I knew I wanted to be close to Halifax in order to get the bike to the docks tomorrow In good time to make my flight home. 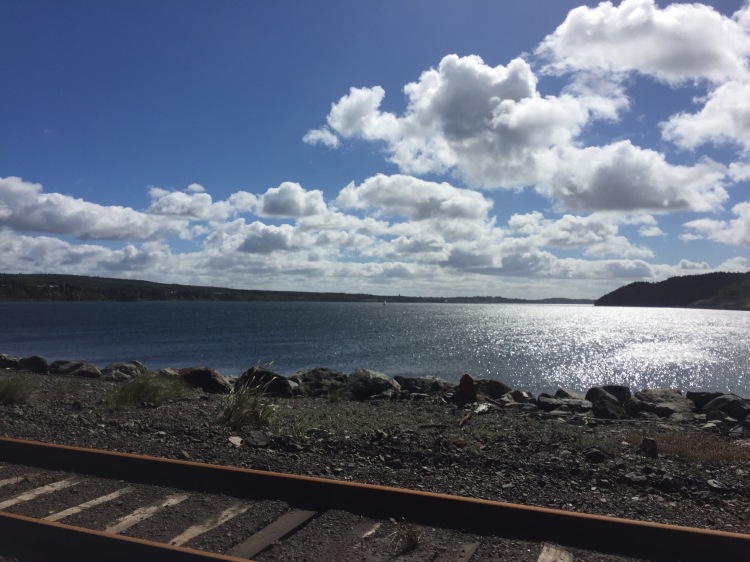 So boom! Shake and load and I’m down the road and rolling past cute villages, classic wooden Canadian homes and village churches.

Before I knew it I was at the Canso Causeway which connects Cape Breton to the mainland of Nova Scotia. 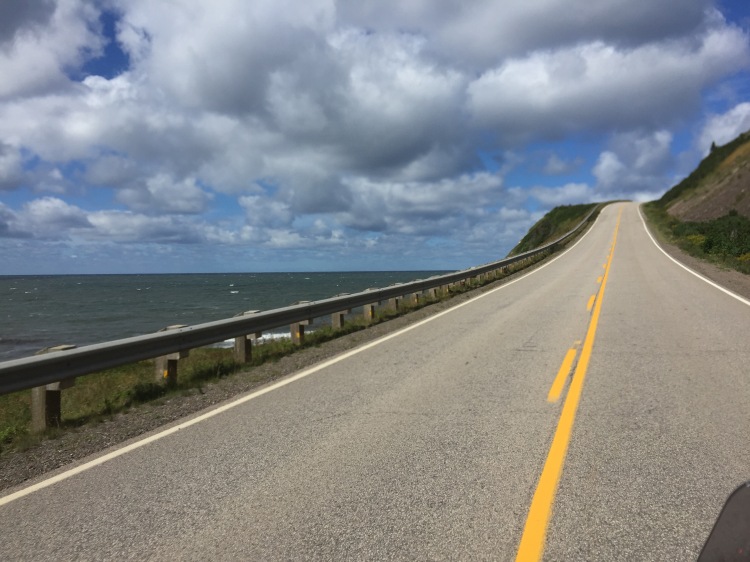 The roads were gorgeous to say the least. I had a little way to go to get to the Cabot Trail.
The route measures 298 km (185 mi) in length and completes a loop around the northern tip of the island, passing along and through the scenic Cape Breton Highlands. It is named after the explorer John Cabot who landed in Atlantic Canada in 1497, although most historians agree his landfall likely took place in Newfoundland and not Cape Breton Island. (Premier Angus L. MacDonald attempted to re-brand Nova Scotia for tourism purposes as primarily Scottish and, as part of this effort, created both the names Cape Breton Highlands and Cabot Trail. 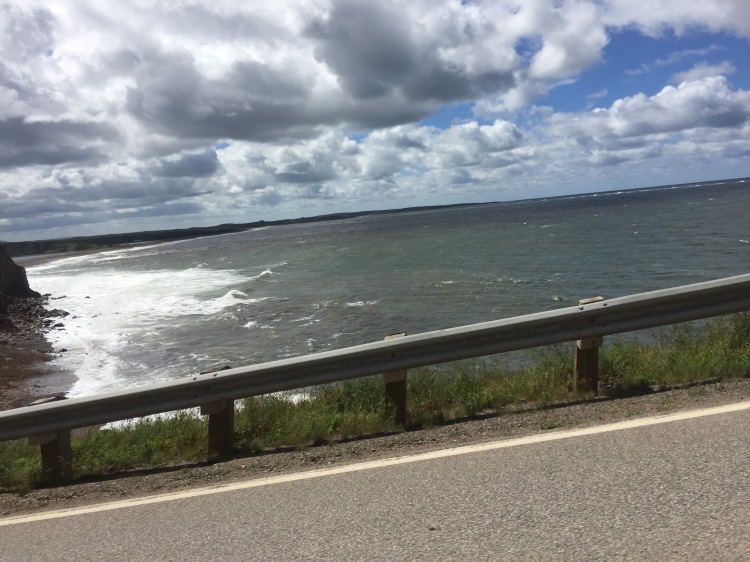 Construction of the initial route was completed in 1932.

Its northern section of the Cabot Trail passes through Cape Breton Highlands National Park. The western and eastern sections follow the rugged coastline, providing spectacular views of the ocean. The southwestern section passes through the Margaree River valley before passing along Bras d’Or Lake 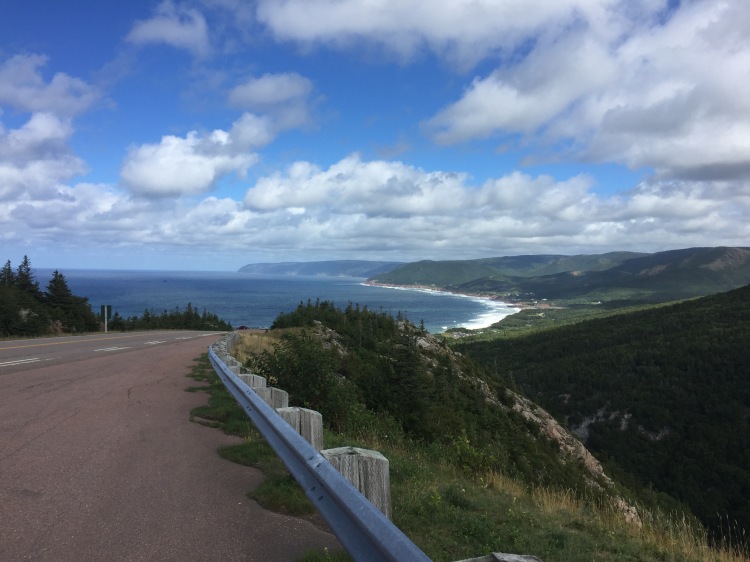 That’s enough about the history of the place.
In my honest opinion the Scotland 500 is way better. I’ve ridden it with my friend Lloyd last year so it’s fresh in my mind.

That’s not to say it’s not amazing. Oh no, but to compare Cape Breton to Scotland’s Highlands is a touch of a mistake to make!!
Cape Breton and the Cabot Trail is different. It’s in a league of its own. 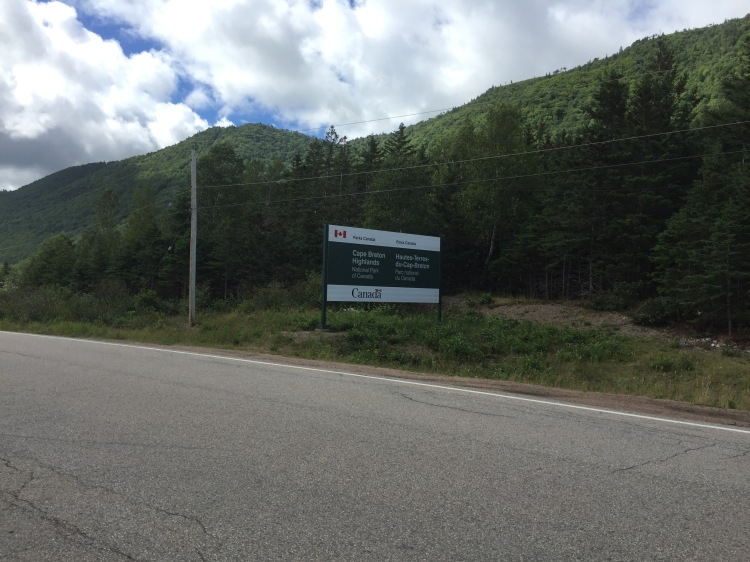 On the day I picked my bike up I shared a taxi to downtown Halifax with Jeff. He lives in Cape Breton and is a biker. He’s told me to ride the Cabot Trail throughout my trip (via comments on my blog!) and he’s been right! Thank you Jeff!! 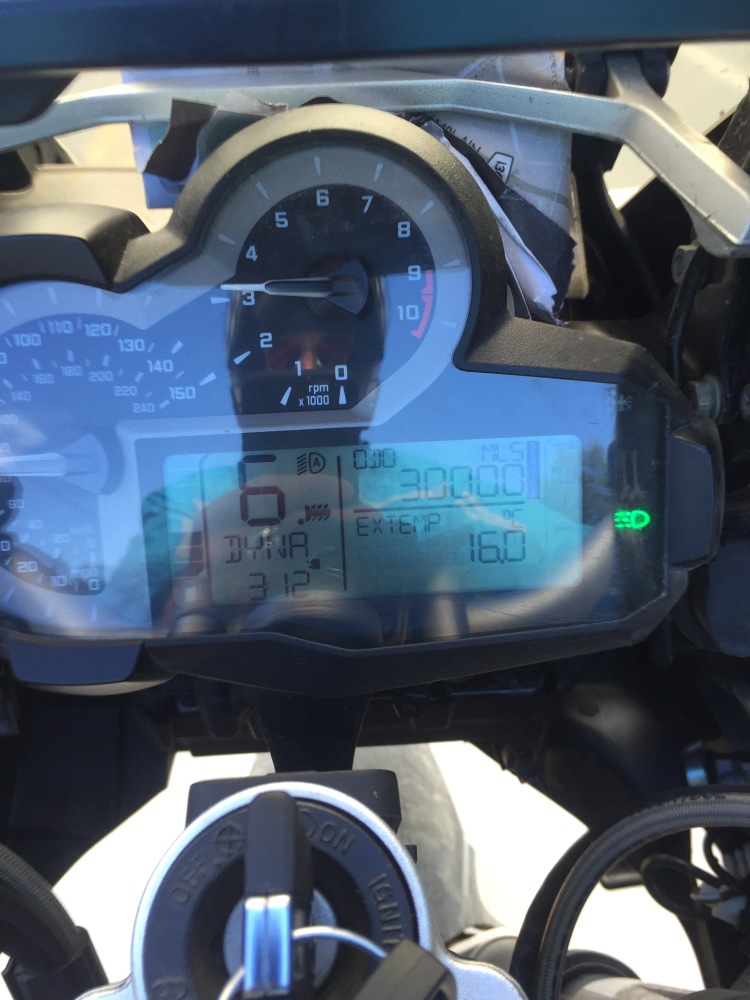 I didn’t know at the time that the USA border guard would not let me in to the USA, so I didn’t think I’d ever get the chance to ride around Cape Breton, but they did refuse me entry and it’s the BEST thing that they could have ever done. I’d like to thank the USA right here and now from the bottom of my heart for not allowing me into their country and having such backward facing attitudes and Federal Laws, and as a result of such I had the chance to ride around the Atlantic Island of Cape Breton and enjoy all it had to offer!!

Somehow I missed the sign for the last few miles of the Cabot trail and ended up at a river crossing via a ferry.

When I pulled up to the ferry which is a chain ferry (most likely because of the short distance and the strong current) which takes you across the water  to Englishtown I realised I didnt have enough Canadian ca$h to pay for my crossing. It was 7$cad and I had 2$cad. Oops. I was a bit fucked as the ride back was a few mile$ +++.

I $truck up a conversation with the biker next to me and noticed he had a U$A number plate from Maine. Then I remembered I had some U$ dollar$ in my $addle bags. I asked him if he would exchange some and he was happy to! I $wapped 5 damp US dollar$ for 5 dry Canadian dollar$. Fucking amazing. I couldn’t believe my luck. $$$

I rode around some of the best roads I’ve ridden in the past 5 weeks. How come I hear you ask? Well because they twist……..and they turn…….and they roll and around the bends and they have hairpins and mountain passes!

Cape Breton has everything that we European bikers like. The rest of Canada…….kinda doesn’t. (more on that in my Post Canada trip blog post to come) 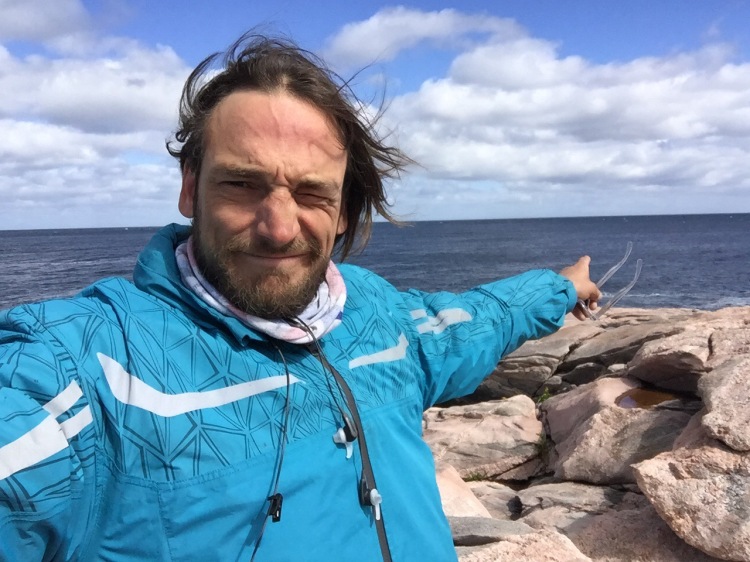 It has ocean views to stare upon and gives you time to think and find yourself in, as you ride along next to skies that float above the blanket of rolling seas that seem to never end.

It’s the kind of place you can loose yourself in……..or a glove! Which I did! 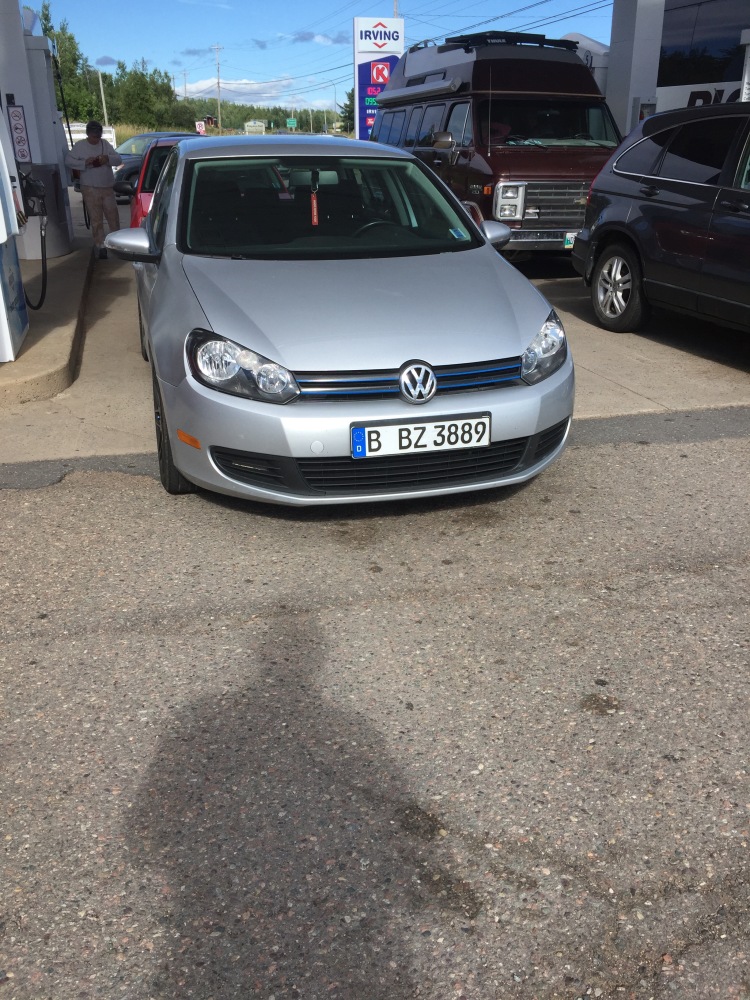 Silly perhaps, but I figure if I ever come off it’s going to be due to someone else rather than my riding ability, and If that ever happens it’s going to hurt, gloves or no gloves. So yeah, one glove I had tucked away came loose. I like my gloves so  I spent 1.30 hours riding back and forth to the 10 mile point where I knew I had it last. Three times back and forth doing detailed sweeps of the hard shoulders both sides, not wanting to leave a man behind, but to no avail. As they say one glove, one life, you gotta do what you can. 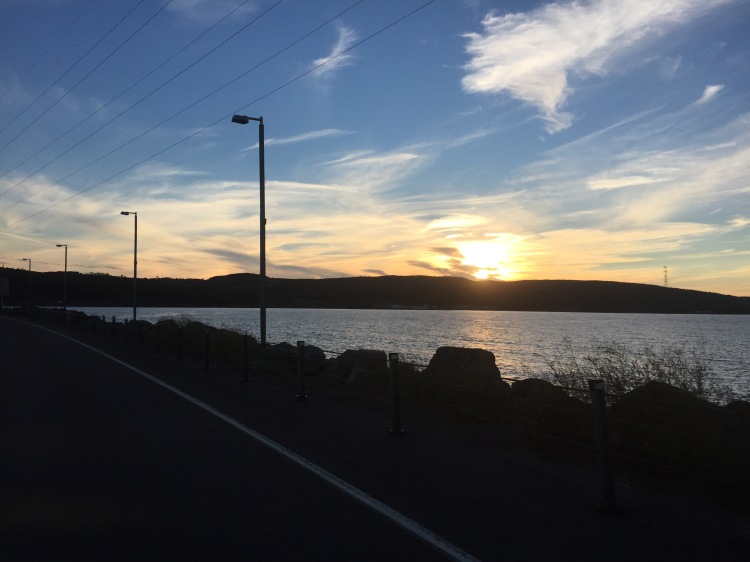 I had lost daylight looking for my glove. Oh well. Fuck it. I have heated grips. I’ve lost a crash helmet and didn’t loose any sleep over it, but at least I gave the glove a chance. 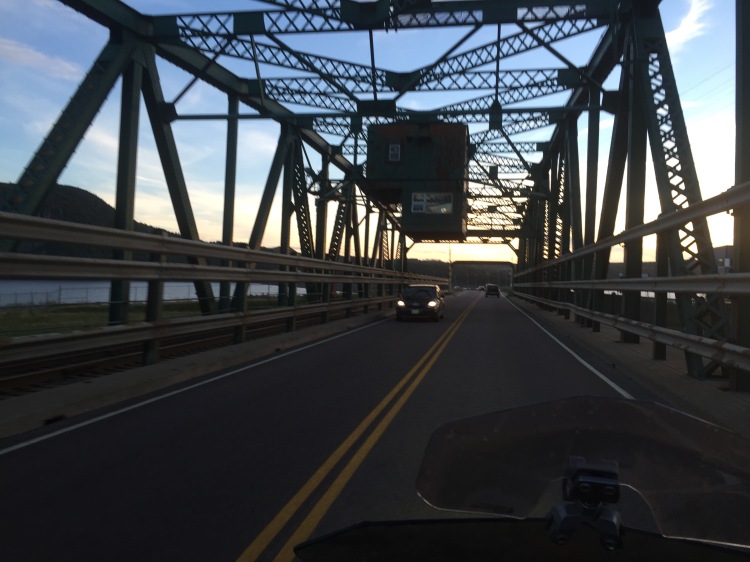 For the next 100 miles I floored it and broke every rule in the book. 1** MPH! plus for the next 100 miles. Like a bullet from a gun I was overtaking everyone, looking out for the law with their radar gun, making sure they don’t spoil my fun, watchful on the shoulders & medians for the moose on the loose, loving the ride and bends, wishing it could never end, like a bat out of hell leading the way, trying to to catch up with the sun and another day. 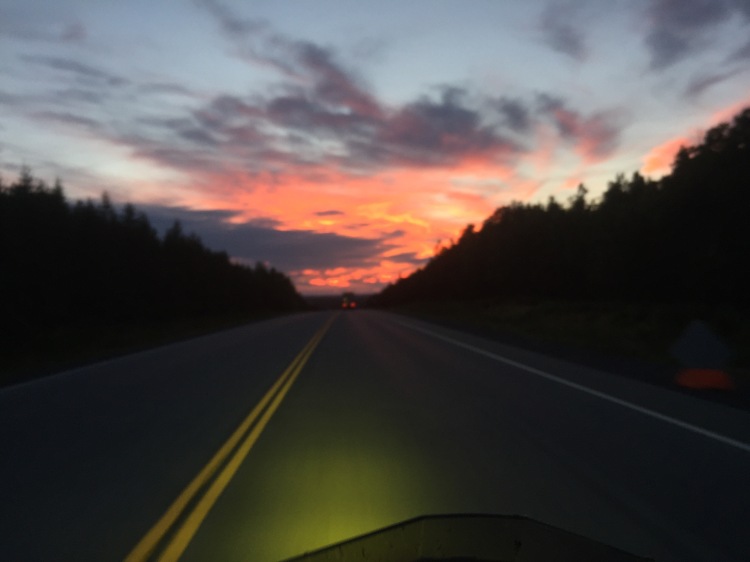 I like riding fast and my bike likes going fast and Canada is HUGE….have I mentioned that?

Sometimes the 80k mph speed limit is like a life sentence, and guilty as I am, I’m not serving it!!!

Say what you will, I’m alive and well, my bike is thankful for being used and not stuck in a garage,  and the Germans know I’m right.

Before I knew it I found myself back on the mainland and tucked the speed down to a lawful level. Sorry Canada. You’ve got me twice for speeding (wait for The Post Canada Article) so time I got my monies worth 🙂 more police on the roads or cameras might do it. But it is a HUGE country so they can’t be there all the time 😉

I found myself in New Glasgow after riding. About 500+ miles today.

New Glasgow is way better than old Glasgow! Why? Because it’s warmer and there no rain!!

I’m about 100 miles away from Halifax where I first started this journey 37 days ago.

Tomorrow I have leave New Glasgow and ride back to Halifax, Nova Scotia (which means New Scotland) and leave my bike (which has done us both proud over the last 9500 miles +) at the docks, and then in the evening fly to old Glasgow in Old Scotland then a connecting flight to (London) Stansted and then a demoralising train and tube journey back home. Although I’m going back to old Scotland and the old England I’ll be taking new Canadian memories and friends with me.


As for now, I’m tucked up in a warm bed in a warm motel room. Sipping a beer, writing this blog. To anyone reading this whom I’ve met along the way, if you’re ever in London……..you got a place to stay and everything.

3 thoughts on “Day 37. Wallace to New Glasgow via Cape Breton Island and the Cabot Trail!”