This weekend I had arranged at last to meet up with Wil Linssen whom I’ve know through FB and the TRF for just over a year now, but had ever met in real life!

I had recently signed up to the BMW GS Challenge in May this year & I asked Wil via FB if he was competing in it too, to which he said he was, and he asked me in return if I’d like to get some practice in this weekend by riding around some trails & byways……how could I resist?

Out riding in the sun!

Wil had a tried and tested 70 mile loop in mind, from the TFR which takes in all sorts of different trails and unpaved roads weaving through the edges of farmland to the byways of Essex and Hertfordshire that lay in secret, ready for someone who knows where they are to have fun and enjoyment riding them!

The pace was relaxed and we had plenty of stops for talking about the previous sections and general bike banter!

My previous experience with riding unpaved roads and byways is limited to a meeting with the legendary Mark Kinnard & Christopher Ellender last year when we did the Thetford Forest 70 mile loop which was my first real whole day of riding trails and unpaved roads. I have also done since a few hundred miles of forestry trunk roads in Canada last year and other bits and bobs I have ridden when I see an unpaved road or byway I feel like taking in when riding about. 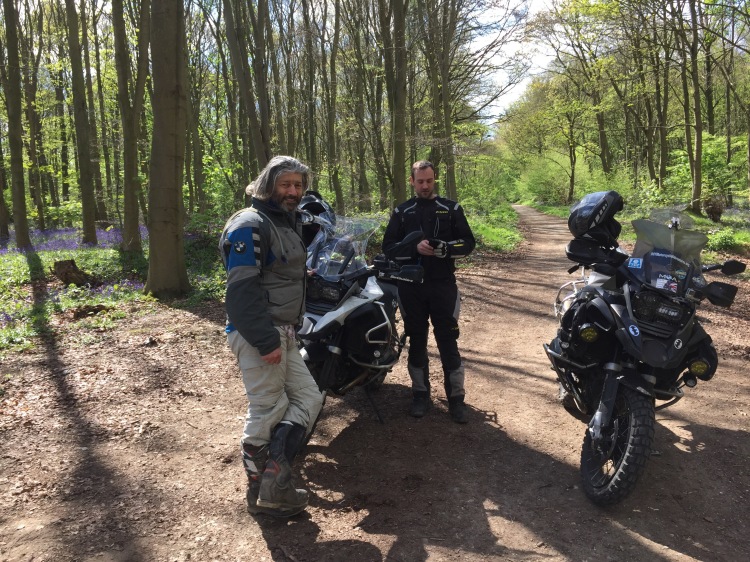 So this time I knew what to expect and have had a bit more practice than my previous outings which all helps when navigating the trails and tracks. there is always so much to take in and learn every time you go out on the byways and it’s helpful to have people like Wil, Stu & Brian with you to give you advice along the way! We rode until about 1pm then stopped for lunch in a cafe and had the obligatory sausage sandwich and cup of tea, after which Brian left us to carry on his day elsewhere & the three of us who remained headed out again!

The tracks were mainly dry which made for great riding, nothing too technical but fun all the same………..until we got to Violets Lane! Wow! Violets Lane is basically a road covered by a river! Sadly for motorbikes the Land Rovers and 4×4’s come down here too, whcih creates very deep ruts in the road which you can’t see as they are covered by the muddy waters! We tested the roads by walking along the sides and poking the water with a stick to see where the ruts were………and I went first and got into a bit of a pickle! Oh dear! I did fine, until about half way through and then I went to the left and my front wheel slipped straight into the deep ruts which the 4×4’s had created! 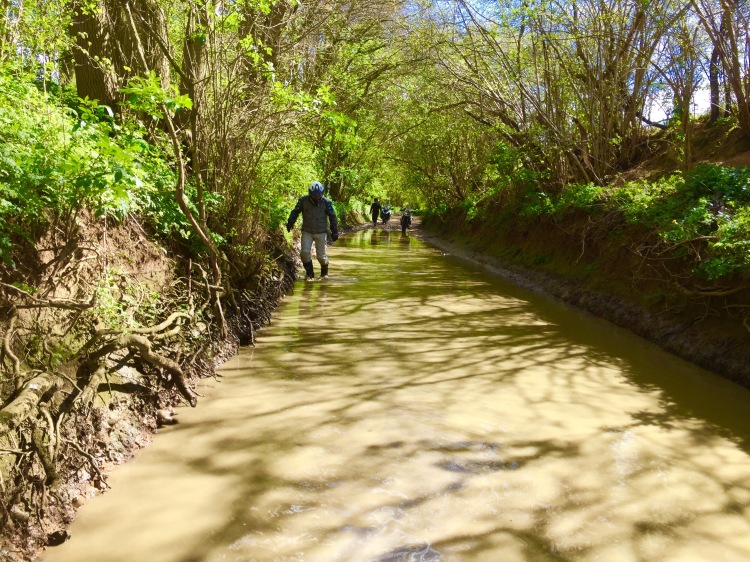 Checking where the ground lies

As you can see from the photo below, my front end was in pretty deep!

By now I was soaked through! The water came in over the top of my boots filling them with the sweet smelling bog water! 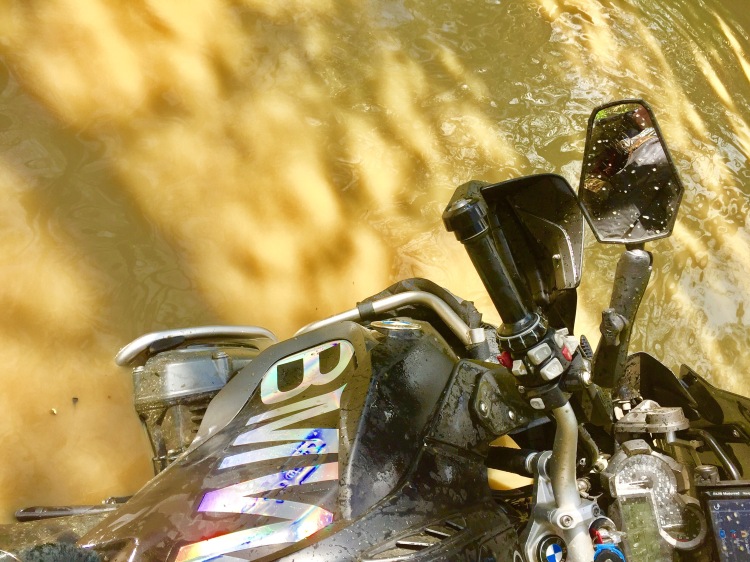 It was at this point I really started to smile! How was I going to get my bike out of this rut? That’s the part I find exciting! Getting out of the shit! Well! I managed with a little help from my friends Wil & Stuart!

The front wheel was completely submerged as was the rear wheel, and the exhaust pipe had filled up with water. My smile just grew bigger as I realised the chaos in was in!

We managed to free the bike by us all pushing and pulling, me pulling the front wheel free from the mud and wheeling it forward one spin at a time and Wil & Stuart pushing the bars and back of her!

Once out of the drink we pushed her up a bank and jammed her in gear and lifted the bike vertically to drain the water from the exhaust pipe! As you know the BMW R1200 GSA is not a light bike, however the three of us managed to upright her and even get a cheeky photo or two of the situation! 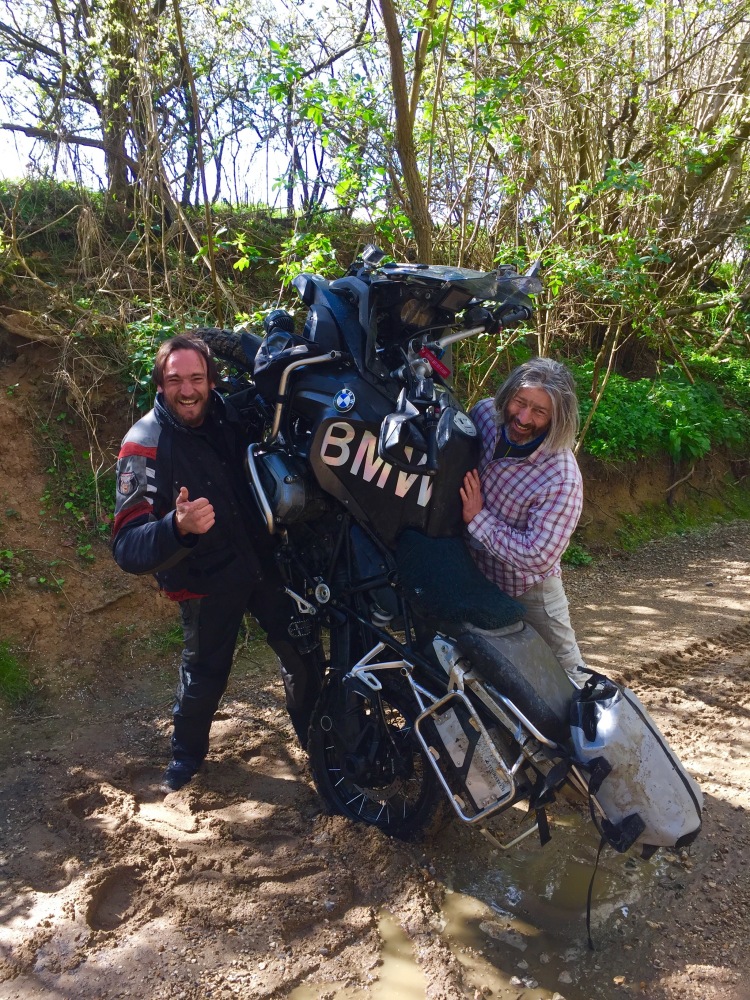 Never seen a GSA vertical before!

After the water was drain we rolled her back down the bank and tried to get to the air filter to check it had not flooded but lacked one tool with an extension!! So I bit the bullet and fiddled with the ride modes and she started back up again with no problems at all! such a relief that she started so easily! What a bike hey! Try doing that with your Cafe Racers or Yamaha MT-10’s!! The BMW GSA is built to be punished and I punish her hard!

This is after pulling her out a little!

After the drama in Violets Lane it was plain sailing for the rest of the day! The trails and byways were excellent fun to ride around. It’s always a pleasure to see England from a different point of view rather than riding down the blacktop all day long.

I have now joined the TRF as I want to ride the byways and unpaved roads more often and I can’t think of a better bunch of people it learn it from. It’s so much fun learning to ride on different surfaces and terrains and it’s great having people with you that can pass on knowledge about how to ride the different trails you encounter, not just how the bike handles but how to respect them too.

Join up today here. Nationally, the TRF has thousands of members, from those that picked up a trail bike in the 1960’s right through to newbies who passed their test yesterday. Each and every member has something to offer as well as something to learn from this welcoming and passionate community. Regional clubs exist in almost every county in the land and put on regular ride outs where new members can be shown the ropes. Want to know which tyres to buy? Need help with a route? Looking for someone to guide you through another part of the country? Looking for someone to ride out and enjoy a pint or two with? By joining the TRF you become part of this community. All TRF members have full access to the TRF Forum!

What more could you ask from such a great fellowship?

Here is a You Tube Video of the day